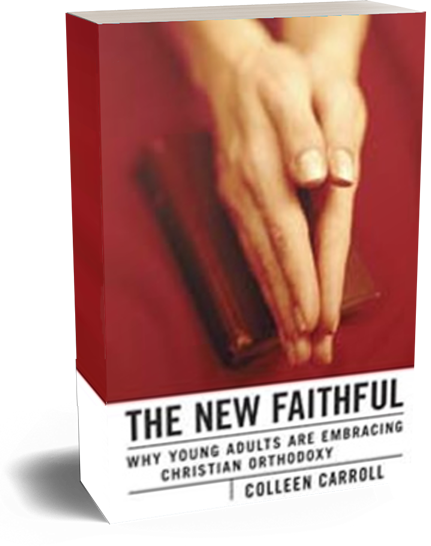 In 2000, Colleen won a $50,000 Novak Journalism Fellowship to research a little-noticed trend that had caught her attention: the attraction of a small-but-growing number of young Americans toward a more robust, demanding and countercultural Christian faith. She spent the next year crisscrossing the country, interviewing more than 500 of these young Catholics, evangelicals and Eastern Orthodox Christians. The result was The New Faithful: a book that profiles an unlikely cohort of young adults whose exposure to the pluralism, materialism and hedonism of today’s society has not squelched their religious impulses but intensified them. Contrary to stereotypes, Colleen writes, “the young Americans driving this trend are generally not products of a religious ghetto or fundamentalists seeking a refuge from a world they fear or loathe. … In Christian orthodoxy, they found not an escape from world but a lens through which to view it – and a vision with which to transform it.”

Novel and timely … this is a book that generously and comprehensively examines a group that is often misunderstood and caricatured.

A blockbuster of a book …

Colleen Carroll blends investigative reporting with profound analysis to reveal a world of young people that most of us do not know exists. This brilliant young journalist opens the door to exciting and inspiring vistas.

Encouraging … we owe thanks for these dispatches from the front.

Frequently moving … a nuanced and cautious reading of the signs of the times.

One of the brightest young Catholic writers in America . . . Colleen Carroll’s book is replete with wonderful human stories of spiritual struggle followed by conversion.

Syndicated columnist and bestselling author of Witness to Hope: The Biography of John Paul II

Colleen Carroll’s The New Faithful reveals the first lights of an unexpected dawn: the growing youth movement toward Christian orthodoxy. … If Carroll’s discernment and clarity are typical of young believers, the future of the faith is bright indeed.

Christianity Today columnist, NPR commentator and author of Facing East: A Pilgrim’s Journey into the Mysteries of Orthodoxy

Colleen Carroll has done a masterful job of bringing together the profiles of a diverse generation of fervent young Christians who are shaking up the American religious scene. … If you are making plans for your church in the next decade you can’t afford to leave this book unread.

Author of Journey Towards God

[T]his exploration probes beneath the surface … analyzing the root causes and the diverse consequences of this new religious movement.

[A] richly reported and beautifully written account … The stories [Colleen] tells are deeply moving. The sense of hope they offer to the spiritual future of this nation is warmly encouraging. This is a marvelous book.

Former TIME correspondent and author of Great Souls: Six Who Changed the Century

What makes this book unique is [Colleen’s] ability to focus on both Catholics and Protestants … This is a great resource for anyone involved in young-adult ministry.

With the knowledge of an insider and the sprightly facility of a good journalist, Colleen Carroll tells one of the largely unheralded stories of our time: the turn of so many highly educated young Americans toward serious religious commitment. … [This] book will become an important document of our time. The orthodox, the unorthodox and the flexible souls in between will find grist here for lively argument and serious reflection.

Anyone who is worried about the future of the Church can look here for hopeful signs.

Colleen Carroll’s reporting and analysis in The New Faithful does more than simply chronicle the embrace of Christianity by young adults, as important as that is. Her interviews and meetings with young American adults serve as documentation of the spiritual and intellectual bankruptcy of postmodernism. The New Faithful is a reminder that when the idols of our age crumble, as they invariably will, it is the truth of Christianity that remains standing.

You may have heard, and you may have believed, that decades of moral, cultural and religious tumult have destroyed the foundations. Colleen Carroll has a different story to tell in this exciting book. Despite everything, the foundations are solid and a new generation of young people, Catholic and Protestant, is discovering the high adventure of Christian fidelity. The rebuilding has begun. The New Faithful is a portrait, both honest and heartening, of the Church of tomorrow, and of today.

With its smart cultural critique and journalistic flair, The New Faithful is a groundbreaking study of religion in America.

A fascinating, highly readable book … Carroll brings the rhythms of the story-teller and the fact-finding of the journalist to bear in helping us to encounter those she calls ‘the new faithful’.

Author and University of Chicago